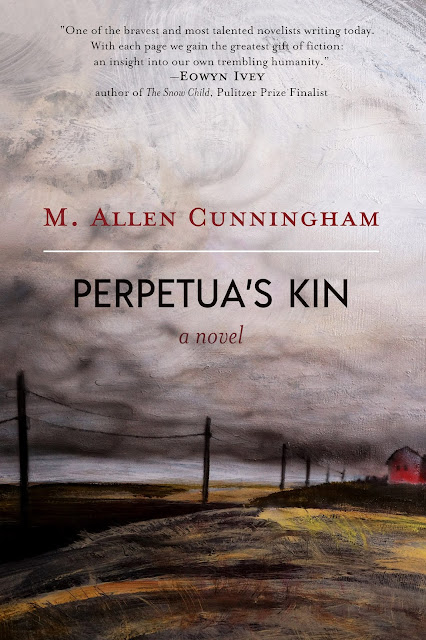 The author of the much acclaimed #1 Indie Next Pick The Green Age of Asher Witherow returns with a riveting historical mystery about a family shaped as much by tumultuous world events as by each of its members' unspoken decisions.

Epic in scope and yet intimate in its emotional power, Perpetua's Kin moves across several generations and much of North America, from Pennsylvania and Iowa in the 1820s, through an American south embroiled in the Civil War, and finally to World War II San Francisco. What emerges is a profoundly contemporary exploration of the American experience as one family embodies it: our heritage of violence, our chronic restlessness and desire for regeneration through technology, and the impossibility of escaping the history that forms us and, always, demands a reckoning.

“With Perpetua's Kin, M. Allen Cunningham once again demonstrates he is one of the bravest and most talented novelists writing today.His prose sings with a rare kind of poetry, even as the story sweeps you along with its dark mystery and heartbreaking tension. With each page we gain the greatest gift of fiction: an insight into our own trembling humanity. into our own trembling humanity.”
-Eowyn Ivey, author of To the Bright Edge of the World
and The Snow Child, Pulitzer Prize Finalist

“A novel in conversation with Faulkner and Melville and possibly even Robert Louis Stevenson. … A writer both original and well aware of the writers who have come before him. Cunningham’s writing, like the scope of his novel, is bold and ambitious.”
-Peter Turchi, ​author of A Muse and a Maze, ​and judge for the Oregon Literary Fellowship

"Perpetua's Kin is beautiful, reminiscent of The Green Age of Asher Witherow in that it has the cadence I remember that takes the reader right in ... M. Allen Cunningham gives us a book to savor -- a fulfilling, substantial book, and a joy to read."
-Janet Boreta, founder of Orinda Books (CA)
Posted by mcunningham at 12:29 PM 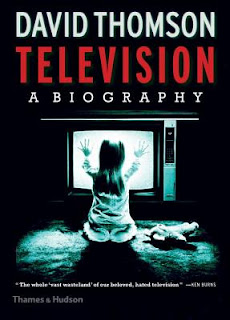 More than a year ago I first read film critic David Thomson’s large new book Television: A Biography. Since then I've returned to its pages often, reveling in Thomson's essential insights and savoring his unconventional approach to his subject. Far from being a dry historical account, a cerebral work of cultural theory or sociological documentation, or a fluffy entertainment chronicle, Thomson’s tome is a remarkably free-spirited (and freewheeling) series of reflective essays on the cultural, existential, and psychic impact of that problematic household fixture: the small screen.

Chronology, thankfully, is out the window here. Instead of a banal blow-by-blow of television’s development from the 1930s onward, Thomson lets the theme of his thoughts be the guide. He riffs, and his riffs cover just about everything interesting, disturbing, and outright surreal relating to this taken-for-granted medium: the TV as precursor of the ubiquitous and entrancing handheld screen; the fallacious nature of TV ratings systems; the subliminal polarities of 1) The Fugitive, which extolled chameleon-like freedom and the excitement of being on the run, and 2) The Donna Reed Show, which extolled domesticity while hinting at the eroticism underlying suburban decency; the behind-the-scenes marital dysfunction of Lucy and Desi; our Pavlovian consent to the eternal “on-ness” of the tube; the mesmerism of the laugh-track; the lethal constancy of commercials and the failure of Mad Men, as an ad-supported show on an ad-dependent network, to live up to its own potential; the sweet depressive allure of “channel-surfing”; the “Gong Show” as a postmodern theater; and on and on. He’s a fantastically intelligent and appealingly “fizzy” writer, and many of his observations here hearken to Neil Postman in Amusing Ourselves to Death or Marshall McLuhan in The Medium Is the Massage.

“The medium had another role,” Thomson writes, “all the more powerful because it was never intended or organized: It promoted the principle that it was sufficient for the world to be witnessed, or to have it pass by. It did not require the effort of understanding or criticism. Its ‘on-ness’ was paramount, just as our participation began to be offset. This was a new solitude, not just that of living alone: You could be in a crowd, but you might not matter.”

A little further on, he writes: “You know this is true: Television is not for attention; the ads trained us in not watching. … The mainstream of the medium clung to the idea that everyone can understand everything — but that can slip into the delusion that no one needs to understand anything.”
And Thomson ties together the generational overrating of screen media -- first in our passive fixation upon the original living room screen, and now in today’s obsessive fixation on handheld screens: “Television wasn’t just an elephant in the room. It became the room, the house, and the world. … The deepest nature of television is to be reassuring. That may be the most frightening thing about it… our making our way by watching screens, or by having them on, hardly aware of how the television screen has trained us for the computer screen, the iPad, the iPhone, or the iI (coming so soon I wish I had invested), and the assumption that because information is carried in those ways so knowledge must exist there.”
Posted by mcunningham at 11:53 AM