Rilke on the Big Screen: There's a Novel for That! 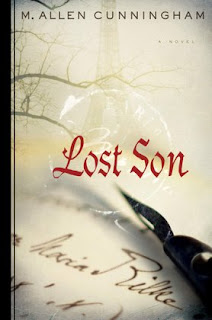 On the Word & Film website, writer Christine Spines' "Poetic Injustice: The 5 Most Fascinating Poet Biopics Never Made" gives us a handful of literary figures to consider for dramatization on the big screen. How surprising -- and gratifying -- to see Rainer Maria Rilke listed there!

I happen to have, ahem, published a novel about the man's life, which I daresay would be a fruitful starting place for any interested filmmakers. Rilke's story, says Spines, has "got the makings for an English Patient-style Oscar sweep," a sentiment I couldn't agree with more. In fact, The English Patient (which I've unabashedly claimed as my favorite film ever) was an inspirational source I constantly returned to during the 6 years spent writing Lost Son.

In describing Rilke's posthumously collected correspondence with Franz Xaver Kappus, Letters to a Young Poet, Spines uses a nice turn of phrase. The letters to Kappus, she says, are about


"surviving the modern world while afflicted by the poetic sensibility."

The phrase gracefully describes the dilemma at the heart of Rilke's whole life, the very dilemma novelized from first page to last in my book, Lost Son. It also echoes language that I myself have used in describing the novel. Lost Son, I have said, "dramatizes the troubles and triumphs this immensely vulnerable personality encountered as he made his way in the modern world." I've said: "Rilke was an open nerve that the world exerted itself upon."

And here's more, from a page on my author website:

From an early age until his death in Switzerland from Leukemia in 1926, Rilke displayed a fierce and wholehearted commitment to his work as a poet. His entire adult life was characterized by a relentless pursuit of art and the conditions propitious to making it. Indeed, his need to live and breathe art rendered his loyalties to family and friends extremely complex, and kept him perpetually unprotected, homeless, and poor. It gave him, however, his best poetic works — not a few of which are held to be among the greatest in the world today.

Rilke’s writings, in their pungent synthesis of mystery, terror, and praise, ring with powerful interiority and speak to the immense sensitivity of their creator — a man who experienced the world’s pain and beauty in the absence of any self-protective membrane or filter, a man for whom every sensory impression became an unstoppable vibration of the soul.The life behind this unparalleled work tells its own strange and inspiring story of long sacrifice and sudden moments of transcendence. Lost Son depicts Rilke in the drive of his all-consuming art as it carries him back and forth across Western Europe over the course of 25 intensely restless years.

I fully concur about the power of this life story, which is why I dedicated more than half a decade to paying homage to it in a novel. An exploration of Rilke's life in a narrative film, if done with the utmost care, could be wonderful in its own way, and that's why I sent copies of my book to a number of gifted filmmakers. Alas, Wim Wenders never got back to me ...

NB: Spines is refreshingly accurate in most of her brief description of Rilke and his life, including correctly designating him as Austrian (rather than the all-too-customary erroneous German). It's worth noting, however, that her third sentence refers to Rilke having "crossed paths" with Paul Cezanne, Auguste Rodin, and Sigmund Freud. She's right about the latter two men (in fact, Rodin is a character in Lost Son, as Rilke's friendship with this great sculptor is an integral part of the novel). But the poet never met Paul Cezanne. Rilke did, of course, attend the important 1907 Paris exhibition of the painter's work, visiting the gallery almost daily. Cezanne's profound influence upon Rilke is articulated with breathtaking power in the letters Rilke wrote to his wife Clara Westhoff during the exhibition's run, posthumously collected as Letters on Cezanne.
Posted by mcunningham at 5:01 PM

"I wonder how privacy would look in a society in which private life was not so thoroughly defined and so frequently degraded by consumerism. More than forty years ago economist Gary Becker observed that as people acquire an increasing number of consumer goods, the time they spend with each item decreases. The ultimate result, predicted his colleague Staffan Linder, would be a 'leisure' that grew increasingly hectic as people tried to keep up with their multitudinous acquisitions. Linder's scenario hardly sounds conducive to intimate association, reflection, and creativity -- all qualities that privacy is usually credited with protecting. In addition to corrupting leisure by cluttering up private space and time, our consumables frequently include gizmos for peering into the private lives of others, or for publicizing our own in the fond hope that somebody else will find our frenzy more interesting than we do. (p.93) ...

"Many of the threats to our private lives, it seems to me, come from people who lack much in the way of a private life of their own. Who would take the time to hack into someone else's computer who had a well-tended garden, a circle of loving friends, or a shelf full of good books? We are under siege by the vacuous as much as by the vicious." (p.114)


I highly recommend Keizer's Privacy. Buy it here.
Posted by mcunningham at 9:25 AM

Man in the Stacks, Part Three

The final installment of my three-part piece as unofficial Writer-in-Residence at Portland's central library is now online at the Oregonian.


... At the Popular Library info desk, a librarian explained to an 80-something man about ebooks and Library2Go. Upstairs in Literature & History, a man at a table read "Sniper: A History of U.S. Marksmen." Deeper in the stacks, a young man encamped on the floor was reading quietly to his girlfriend from a book of poetry. "That's a pretty good one," I heard him say, the sound of a smile in his voice. I remembered the man in the mesh baseball cap. We'd come from different places, the lot of us, but we were all here for the same reasons. We were looking for education, art, civic involvement, and yes, the meaningful wasting of time. With gorgeous grace, the library furnished it all. ...

(N.B.: An abridgement of the complete series will appear in this Sunday's (10/21) print edition of The Oregonian.)

In the Library, Part Two

My second of three dispatches as unofficial Writer-in-Residence at Portland's Central Library is now live on the Oregonian website.


I headed across the second-floor rotunda to the Business and Science Library and entered the stacks. A patron was crouched before a bottom shelf pulling books, inspecting them, tucking some underarm, replacing others. What happens amid these aisles is something sensorial, something personal because essentially physical. Neither I nor anyone I know will ever search Google for every title, author, scientific discovery, or school of thought contained in the Central Library, but here, because they've been arranged all together at arm's length, we will certainly happen upon some. The library is meticulously organized but breeds chance discoveries. It's public and yet serene. You're never alone in the library, but your privacy is safer than almost anywhere. ...

Read the rest.
Posted by mcunningham at 9:13 AM

This month, I begin my second year working with the Oregon Humanities Council facilitating public conversations about the cultural impact of e-books and the many implications of e-reading. One worrisome facet of e-reading is that of reader vulnerability, i.e., the unchecked power of digital content providers to control or restrict the availability of a text at the push of a button; to block or wholly disable reader access; to censor or otherwise manipulate content at will; and to infringe upon reader privacy in any number of ways.

In the world of print books, it's long been a role of the public library to mitigate reader vulnerability. When it comes to e-reading, too, librarians are working daily at all levels to provide and protect reader access and defend reader rights and privacy. They face unprecedented challenges, however.

Last weekend at the Central Library here in Portland, I attended an outstanding panel presentation on the subject of library access to e-books. Publisher/library relations on this matter have become increasingly heated in the last few weeks, as ALA president Maureen Sullivan's recent open letter to American publishers revealed.

The Central Library panel was a wealth of up-to-the-minute information about the challenges libraries continue to face in a current publishing climate where restricted access is the default. The panel featured Molly Raphael (immediate past president of the ALA), present Multnomah County library director Vailey Oehlke, and librarian and digital access expert Greg Williams. Each spoke at length and with great first-hand knowledge and insight into a troubling state of affairs.

The panel is now available as a podcast on the Multnomah County Library website. It will interest and enlighten anybody concerned about the continuing role of our beloved public libraries in the increasingly centralized "information economy" of a so-called digital age.

In light of the upcoming vote here in Oregon's Multnomah County on establishing a permanent library district, I'm writing a short series about Portland's Central Library for The Oregonian. I still remember my first visit to the place. It was eight years ago, on a trip from out-of-state. Having come from a municipality where, thanks to citizen apathy, libraries were mostly decrepit facilities from the ancient '60's (with dilapidated collections to match), I was wonder-struck.

My first dispatch as self-appointed library Writer-in-Residence posted on The Oregonian website this morning. (Two more online installments will follow in the next two weeks, with the whole thing going into the Sunday paper toward the end of the month.)


... Encamped at tables and inquiring at Info, the patrons were as variegated as the library collection itself -- people of all descriptions, ages, ethnicities, and interests. They sauntered in slowly, looking to kill time, or they beelined to the Holds. They pushed a walker or trailed a speedy preschooler. They brought their homework or just idle curiosity. A few carried laptops, many a canvas tote. Among them were Portland natives and arrivistes. Some undoubtedly worked for the city, some in industry, and some slept last night on the street. Some had come for leisure. Others were here to search online job listings via a library terminal. Still others were learning English or cramming for their GEDs. There were 30-50 in the room, but only when someone sneezed did I realize how quiet it was. ...

Read the rest.
Posted by mcunningham at 12:08 PM