“Cunningham Has Wrestled Alligators Professionally,” Or: Variations on My Author Bio 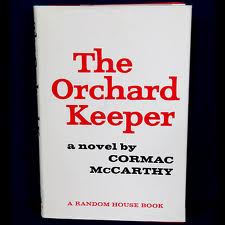 Gone, gone are the days when back-flap author bios were actually biographical in nature. Consider this artifact, from the rear of Cormac McCarthy’s 1965 debut, The Orchard Keeper. “Cormac McCarthy was born in Rhode Island in 1933,” it begins, “but moved to Knoxville, Tennessee, at the age of four.” We go on to learn that the author graduated high school in 1951 and then enrolled at the University of Tennessee where his performance “was so poor that he was asked not to return,” that he joined the Air Force in 1953 and spent of half of his four-year enlistment in Alaska, that he returned to university for four years but never got that degree, and that he “began work on The Orchard Keeper in 1959, but the necessities of life delayed its completion.”

From our distant vantage point in this age of “platforms” and all-encompassing commodification, doesn’t the McCarthy sketched here look distinctly, even perversely “unreliable”; i.e. unmarketable? Where are the guy’s creds? Where, for heaven’s sake, is the branding? 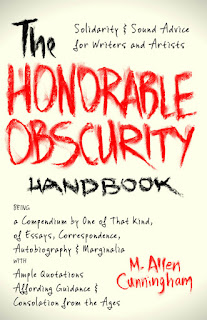 Today’s author bio, we all realize, is prime real estate. It is an ersatz CV precisely calibrated to persuade potential consumers of the author’s “content-providing” capacity and — more importantly — to encourage the outlay of cash in the amount of the cover price. Let us move units and never pause. Not only do I understand this, but I’ve done a great deal of market research. So today, after an in-depth comparative study of years, I’m proud to announce that I have identified each of the discrete author classifications (seven in all) that characterize contemporary publishing. I’ve done so, dear reader, in order to furnish you my own author bio in each of the seven variations! For the first time ever, the M. Allen Cunningham you prefer most can be yours, and you will, I trust, happily proceed therewith to your purchase of his latest title, The Honorable Obscurity Handbook. I am here to serve. Behold:

M. Allen Cunningham is the author of two acclaimed novels, The Green Age of Asher Witherow and Lost Son, and the illustrated, limited-edition story collection Date of Disappearance. He is the co-founder of the cultural commentary blog Soul Shelter and the recipient of fellowships from the Oregon Arts Commission, Literary Arts, and Yaddo. Cunningham lives in Portland, Oregon.

M. Allen Cunningham earned his MFA at the University of Long Walks and Artistic Struggle. The recipient of numerous trans-chronological fellowships, he has studied at Walden Pond with Henry Thoreau, in Northern California with John Steinbeck and Wallace Stegner, in Switzerland, Germany, and France with Rainer Maria Rilke, and in London with John Keats and William Shakespeare. He is a current Writer in Residence in the Blue Room at Powell’s Books, Portland, Oregon. He teaches writing to himself on a daily basis.

M. Allen Cunningham has worked as a swimming instructor, a housepainter, a hospital purchasing agent, a file clerk, a commercial mortgage administrative assistant, a housepainter, a retail merchandiser, a copy-machine operator, a housepainter, a ranch caretaker, and a bookseller. He has delivered flowers in the middle of the day and newspapers in the dead of night, and he has painted houses. He’s lived in seven different apartments in six different cities and agrees that life, like housepainting, can be tough and you’ve got to be resilient. Through it all, he’s kept on writing.

4)    The Embellisher (aka The Personality)

M. Allen Cunningham mastered the art of miming at nineteen months of age and later, a toddler runaway, supported himself as a sought-after street performer in Las Vegas. At seven he joined a cult in Delaware having to do with oven mitts, but upon his selection as the cult’s new Grand Master he elected to leave in order to devote himself to a prize career wrestling alligators. He is the founder of the Antarctic Thespian Society, is a nationally accredited porcupine-trainer, and has memorized Moby-Dick in its entirety.

M. Allen Cunningham is President Emeritus of the American Academy of Words, Phrases, and Sentences. He is Chair of the Board of American Paragraphs, which he founded with Gore Vidal in 1958. He has received all of the highest literary honors, including the Eminently Finished Manuscript Prize, the Novelist’s Gratification Award, the Four-Hundredth Draft Literary Fellowship, and the Best Possible Book of All Books With This Particular Title Award. Just hand him the next prize, please. He will place it beside his Royal HH typewriter.

M. Allen Cunningham gets a kick out of anagrams like Prenatal/Parental, often brings up Maslow’s Pyramid in spousal arguments, and wishes Occam’s Razor were considered more cutting edge. He lives in Portland, Oregon, in an old creaky house with fourteen cats but no mice, where he tinkers away on a Royal HH typewriter. He hopes you like the sweater vest he’s sporting semi-ironically in his author photo.

M. Allen Cunningham is a writer.

The Honorable Obscurity Handbook is now for sale from Atelier26 Books.
Posted by mcunningham at 2:29 PM

The following comes from Wieseltier's May 19th commencement speech at Brandeis University. Read the whole speech in The New Republic.

"There is no task more urgent in American intellectual life at this hour than to offer some resistance to the twin imperialisms of science and technology, and to recover the old distinction — once bitterly contested, then generally accepted, now almost completely forgotten – between the study of nature and the study of man. As Bernard Williams once remarked, “’humanity’ is a name not merely for a species but also for a quality."  You who have elected to devote yourselves to the study of literature and languages and art and music and philosophy and religion and history — you are the stewards of that quality. You are the resistance. You have had the effrontery to choose interpretation over calculation, and to recognize that calculation cannot provide an accurate picture, or a profound picture, or a whole picture, of self-interpreting beings such as ourselves; and I commend you for it.

"Do not believe the rumors of the obsolescence of your path. If Proust was a neuroscientist, then you have no urgent need of neuroscience, because you have Proust. If Jane Austen was a game theorist, then you have no reason to defect to game theory, because you have Austen. There is no greater bulwark against the twittering acceleration of American consciousness than the encounter with a work of art, and the experience of a text or an image. You are the representatives, the saving remnants, of that encounter and that experience, and of the serious study of that encounter and that experience – which is to say, you are the counterculture. Perhaps culture is now the counterculture.

"So keep your heads. Do not waver. Be very proud. Use the new technologies for the old purposes. Do not be rattled by numbers, which will never be the springs of wisdom. In upholding the humanities, you uphold the honor of a civilization that was founded upon the quest for the true and the good and the beautiful. For as long as we are thinking and feeling creatures, creatures who love and imagine and suffer and die, the humanities will never be dispensable. From this day forward, then, act as if you are indispensable to your society, because – whether it knows it or not – you are."
Posted by mcunningham at 8:36 AM

The Honorable Obscurity Handbook Has Arrived!

Taking a cue from Tillie Olsen's Silences and the works of Alain de Botton, The Honorable Obscurity Handbook is novelist M. Allen Cunningham's gloriously uncynical answer to a publishing world awash in cynical careerism and bottom-line thinking. Part consoling sourcebook, part cultural commentary, part wry self-help manual, and part inspirational anthology, this slim volume is a celebration of the creative spirit. It is packed with insights relevant to any creative worker, whatever their field.


"They're out there. Day and night, in any given locale, they're hard at it. Our novelists and poets, who strive away in shabby rooms, reverse the formula daily: they live in order to work. But their work helps us to live. They win no honors and receive no grants. They hobnob with no famous elders. Yet they comprise, in their dedication and lack of 'prospects,' a force of pure, unpaid human creativity in service to something larger and more lasting than themselves. Their incentive? Destiny. Their inspiration when faced with privation and self-doubt? Bygone literary gods who struggled much the same. Their rewards: How to name them? But they more than mitigate the annoyances of thin wallets, scant praise, nonexistent reputations."
-M. Allen Cunningham, from the intro

Posted by mcunningham at 8:32 PM

Carr, author of the Pulitzer finalist The Shallows: What the Internet Is Doing to Our Brains (W.W. Norton, 2010), never fails to cut to the quick in the cultural commentary on his occasional "Rough Type" blog. As contemporary interpreter of the fetishism, solipsism, and pervasive absurdities that characterize the technocrats of Silicon Valley, Carr is among the best.

The following is from a very recent Rough Type post about Facebook and its new TV ad campaigns.

"...Every object, at least in our perception of it, carries its antithesis. Behind the plenitude symbolized by the vase we sense an emptiness: the wilted bouquet rotting in a landfill. And so it is with the tools of communication. When we look at them we sense not only the possibility of connection but also, as a shadow, the inevitability of loneliness. An empty mailbox. A sheet of postage stamps. A telephone in its cradle. The dial of a radio. The dark screen of a television in the corner of a room. A cell phone plugged into an outlet and recharging, like a patient in a hospital receiving a transfusion. The melancholy of communication devices is rarely mentioned, but it has always haunted our homes.

"Home and Away are the poles of our being, each exerting a magnetic pull on the psyche. We vibrate between them. Home is comforting but constraining. Away is liberating but lonely. When we’re Home, we dream of Away, and when we’re Away, we dream of Home. Communication tools have always entailed a blurring of Home and Away. Newspaper, phonograph, radio, and TV pulled a little of Away into Home, while the telephone, and before it the mail, granted us a little Home when we were Away. Some blurring is fine, but we don’t want too much of it. We don’t want the two poles to become one pole, the magnetic forces to cancel each other out. The vibration is what matters, what gives beauty to both Home and Away. Facebook Home, in pretending to give us connection without the shadow of loneliness, gives us nothing. It’s Nowheresville."