Last night while reading this first edition library copy of Nicholson Baker's U and I, I was delighted to find a tiny artifact peeking from behind the book's rear flap... 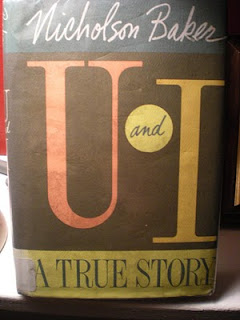 It was a fortune cookie strip: "All progress occurs because people dare to be different."


More of a proverb than a fortune, really, like the contents of most fortune cookies these days -- but how appropriate for Baker's book. And what an affecting reminder of the tangible, material, solitary, and yet simultaneously and mysteriously interpersonal joys that only books in tactile, material (non-digital) form can afford.
Posted by mcunningham at 3:36 PM

"Possessing its own genealogy, dynamics, logic, and future, art is not synonymous with, but at best parallel to history; and the manner by which it exists is by continually creating a new aesthetic reality. ... Nowadays, there exists a rather widely held view, postulating that in his work a writer, in particular a poet, should make use of the language of the street, the language of the crowd. For all its democratic appearance, and its palpable advantages for a writer, this assertion is quite absurd and represents an attempt to subordinate art, in this case, literature, to history. It is only if we have resolved that it is time for Homo sapiens to come to a halt in his development that literature should speak the language of the people. Otherwise, it is the people who should speak the language of literature."
Posted by mcunningham at 7:24 PM

E-Reading Device? Not For This Young Bibliophile

Twenty-six-year-old Emma Silvers writes in Salon about refusing to give up regular old books in favor of pixels on a screen. This is an excellent contrarian perspective from a member of a generation we're trained to believe wants everything in electronic, virtual form.

"...For me, to deny books their physical structure simply ignores far too much of what makes them enjoyable. The commitment they require, the way they force you into a state of simultaneous calm and focus -- these are things I have yet to duplicate by any other means. Not to mention other factors that I'm terrified have been lost in the transition from paperback to screen: the mood it puts you in to carry a particular book in your bag all day, or the giddy/strange feeling of seeing your favorites on someone else's shelves...."
Posted by mcunningham at 8:26 AM