— Contrary to popular opinion, it’s about more than doing what feels good —

Recurrently I notice Joseph Campbell getting bashed because his scholarship is so frequently misappropriated and his "follow your bliss" is so often quoted out of context. The man was brilliant, and his insights into creative and human struggle were not the syrupy feel-good stuff of New Age self-help books. So today I'm revisiting this post I originally wrote back in 2008.

In a powerful lecture entitled “Mythic Literature,” recorded in the 1960s, the noted scholar of world mythologies, Joseph Campbell, said:


Every now and then, you will face the great mysteries that mankind has been facing. The mystery of death, when it eats into you. The mystery of the magnitude of the cosmos and your own place in it and all. And the imagery that will be coming up then will be imagery that will be matched in the mythologies of the world… Abraham Maslow [a psychologist and a spokesman of the “positive psychology” movement]…published a little paper in which he discussed the values for which people lived. He named five:
Survival
Security
Prestige
Personal Relationships
Self-Development
And I remember when I read that, I thought those are exactly the values that go completely to pieces when one is seized with a mythological zeal. If there is something you are really living for, you will forget security, you will forget even survival, you will forget your prestige, you will even forget your friends, and as for self-development, that’s gone. When Jesus said ‘He who loses his life shall find it’ he was talking about this. And it’s that jump, from the thing that animals live for, to the thing that only a human being can live for, that is the jump [into the Heroic Journey]…

Over the past ten years or so, I’ve done a good share of reading into world religions and mythologies. These age-old story patterns and images have taught me much about the art of writing (my first novel used a mythic structure of sorts). Naturally, as any inquiry into mythology will do, mine led me to Campbell, and his powerful ideas have had a lasting impact on my life.

For the last twenty-odd years, Campbell has been criticized as a guru of the New Age movement. He was nothing of the kind, however misappropriated some of his ideas have been. Quite to the contrary, he was an eminent scholar — and certainly one of the most brilliant minds of the twentieth-century.

Campbell came to public attention in the mid-1980s, thanks to the wildly popular six-part PBS series, The Power of Myth, in which he was interviewed by Bill Moyers. But Campbell’s career as a mythographer had its truer, more auspicious beginning a full three decades earlier, with the 1949 publication of the groundbreaking book, The Hero With a Thousand Faces.

In its pages, he presented a comparative study of mythological stories and belief systems from all over the world, and demonstrated the universality of many symbols (or archetypes) mankind has used for ages. He called this the “grammar of symbols,” and argued that every world culture produces a “mono-myth” in which the journey of a hero figure is marked by certain clearly distinguishable stages, such as: The

The Heroic Journey, found in so many different myths, reveals a psychological reality common to all human beings, and Campbell showed how modern psychology can shed light on the symbology of these diverse myths.
Each of us is born, confronts life’s mysteries, enjoys its graces, suffers its blows, and must eventually face death. That experience, being universal, is a “mythic” experience. We all share it, and we all look to stories, images, and belief systems to better understand it. That’s what Campbell’s work explored. In his preface to that 1949 book, he wrote:


There are of course differences between the numerous mythologies and religions of mankind, but this is a book about the similarities; and once these are understood the differences will be found to be much less great than is popularly (and politically) supposed. My hope is that a comparative elucidation may contribute to … unification, not in the name of some ecclesiastical or political empire, but in the sense of human mutual understanding. As we are told in the Vedas: ‘Truth is one, the sages speak of it by many names.’

And being a passionate humanist, and believing that his scholarly studies could be deeply relevant to the wider culture beyond academia, Campbell did not shy away from speaking in very personal terms about the “Heroic Journey” as it applied to everyone, even in modern life.

“The final secret of myth,” he said, “[is] to teach you how to penetrate the labyrinth of life in such a way that its spiritual values come through.”

In Campbell’s view, recognizing the mythic forces at work in one’s life could deeply enrich that life. He was at his most outspoken about this in The Power of Myth. And it was there, while talking about the Heroic Journey, that he used a phrase that has almost single-handedly popularized him among New Agers: “Follow Your Bliss.”

Frankly, I cringe whenever this phrase gets invoked in a twinkling, wind-chimey, neo-mystical manner, because all too often it’s being appropriated to justify self-indulgence or shallowness (it’s used in just this way by a character in the recent film, The Namesake, adapted from Jhumpa Lahiri’s novel).

I believe Campbell’s maxim is most meaningful — and useful — when placed firmly in the context of the man’s serious thought, and his lifelong work. “Following your bliss,” as Campbell means it, requires more than doing what feels good at any given moment. Being a matter of “mythological zeal,” it might require a confrontation with a dragon or two, a painful sacrifice or an embarkation into loneliness — in short: a parting with one or a few of Maslow’s Five Values. Here’s where bliss comes up in the conversation with Bill Moyers:


-Moyers: How do I slay that dragon in me? What’s the journey each of us has to make, what you call “the soul’s high adventure”?
–Campbell: My general formula for my students is “Follow your bliss.” Find where it is, and don’t be afraid to follow it.
-Moyers: Is it my work or my life?
–Campbell: If the work that you’re doing is the work that you choose to do because you are enjoying it, that’s it. But if you think, ‘Oh no! I couldn’t do that!’ that’s the dragon locking you in. ‘No, no, I couldn’t be a writer,’ or ‘No, no, I couldn’t possibly do what So-and-so is doing.’
-Moyers: In this sense, unlike heroes such as Prometheus or Jesus, we’re not going on our journey to save the world but to save ourselves.
–Campbell: But in doing that, you save the world. The influence of a vital person vitalizes, there’s no doubt about it. The world without spirit is a wasteland. People have the notion of saving the world by shifting things around, changing the rules, and who’s on top, and so forth. No, no! Any world is a valid world if it’s alive. The thing to do is to bring life to it, and the only way to do that is to find in your own case where the life is and to become alive yourself. … There’s something inside you that knows when you’re in the center, that knows when you’re on the beam or off the beam. And if you get off the beam to earn money, you’ve lost your life. And if you stay in the center and don’t get any money, you still have your bliss.

The idea that following one’s bliss, finding one’s own heroic path, requires sacrifice and the abandonment of “security” or “prestige” or “self-development” rings very true with me, and I think it’s unfortunate that this elemental, recurring aspect of Campbell’s thought does not come out clearly enough in this oft-excerpted part of the Moyers dialogue (read closely, though, and you see it embedded in that last comment about not “getting any money”) .

Still, as a writer of stories, I identify strongly with the vision in Campbell’s lifelong work: the recognition of a universal human narrative, a Heroic Journey through life’s frightful and glorious moments alike, a constant adventure that demands we remain on the path which will best allow us each to confront our fears and fulfill our potential. As Campbell reiterated throughout his career, the journey may be hard, the road may be narrow, the destination obscured, but we mustn’t refuse the “call to adventure.”
I hope I’ll be brave enough, always, to make the most worthy sacrifices, to go toward the dragon if that’s what’s most necessary, to seek spiritual adventure over stagnant convention. I want to recognize true and enduring fulfillment.

Posted by mcunningham at 9:15 AM 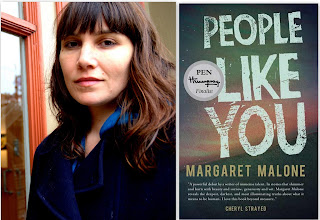 PORTLAND, OR — Atelier26 Books is thrilled to join PEN New England in announcing that Portland writer Margaret’s Malone’s short story collection People Like You has been named one of two finalists for the 2016 PEN/ Hemingway Award for Debut Fiction. This puts Malone in a distinguished list of previous honorees that includes Junot Diaz, Elizabeth Gilbert, Edward P. Jones, Jhumpa Lahiri, Marilynne Robinson, and George Saunders. In addition to the national notoriety that comes with PEN/Hemingway honors, Malone will be given a one-month residency at Wyoming’s legendary Ucross Foundation.

People Like You, a collection of nine stories all featuring female protagonists, was published last November in trade paperback original by Atelier26 Books, a Portland literary publisher with a staff of two. 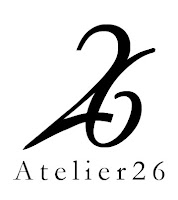 “Margaret’s work in People Like You is so brilliantly crafted, moving, and witty,” said M. Allen Cunningham, who runs Atelier26 Books from his home office, “that it’s an incredible pleasure to see it recognized by such an illustrious award. I can’t help thinking that this is exactly how a high-profile literary prize should work. I hope other very small presses will take heart from this. So many are doing such excellent books, and yet many deserving authors fly under the radar.”

The 2016 PEN/Hemingway Award judges were Joshua Ferris, Alexandra Marshall, and Jay Parini. Malone will collect her finalist citation at a ceremony at the John F. Kennedy Presidential Library in Boston on Sunday, April 10th. Her fellow finalist is S.M. Hulse for Black River, and the winner of the 2016 award is Ottessa Moshfegh for Eileen. Karim Dimechkie (Lifted by the Great Nothing) and Chigozie Obioma (The Fishermen) receive honorable mention.

Margaret Malone is the recipient of fellowships from the Oregon Arts Commission and Literary Arts, two Regional Arts & Culture Council Project Grants, and residencies at The Sitka Center and Soapstone.  Her writing has appeared in The Missouri Review, Oregon Humanities Magazine, Coal City Review,  Swink, Nailed, latimes.com, and elsewhere, including recently the Forest Avenue Press anthology The Night, and the Rain, and the River. A Dangerous Writers alumnus, Malone has a degree in Philosophy from Humboldt State University and has taught creative writing as a visiting artist at Pacific Northwest College of Art. She lives with her husband, filmmaker Brian Padian, and two children in Portland, where she co-hosts the artist and literary gathering SHARE. 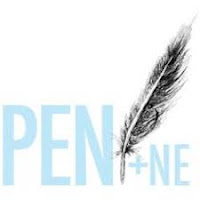 M. Allen Cunningham, a novelist and editor, founded Atelier26 Books in 2011. People Like You is the press’s eighth release. Atelier26 specializes in contemporary literature in elegantly designed trade editions and its titles are distributed to the trade by Independent Publishers Group/Small Press United.

The late Mary Hemingway, a member of PEN, founded the PEN/Hemingway Award in 1976 both to honor the memory of her husband, Ernest Hemingway, and to recognize distinguished first books of fiction. The award is funded by the Hemingway Family, by the Ernest Hemingway Foundation and by PEN New England.

For more information, contact Atelier26 HQ at atelier26books@gmail.com
Posted by mcunningham at 8:10 PM