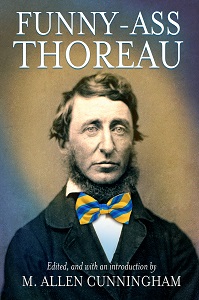 Coinciding with the release of the newest Atelier26 title Funny-Ass Thoreau, edited by M. Allen Cunningham, Lit Hub is featuring Cunningham's full introduction to the book.


When I was fourteen my mother, exasperated by the onset of my teenage angst, handed me a Penguin paperback of Thoreau’s Walden and said, “Read this. The guy who wrote it was a rebel like you.” For some reason, I did as she suggested, and in Walden’s transcendental rants I found all my angsty teenage convictions gloriously and authoritatively ratified. Institutions were bad: they wanted to straitjacket my thoughts and crush my creativity; my elders were either corrupt or absent-mindedly hypocritical, either tyrannical or brainwashed, tragic or just pitiful; the dictates of fashion and good form were stifling and almost always ridiculous; money was a golden calf, prosperity overrated, and “making a good living” was a fool’s errand; as for our so-called government, it was just one big immoral business. ...

For me, Thoreau’s writing was a drug. It knocked my neurons around. It worked me over completely, induced a sort of insanity, and actually changed the course of my life forever. And still, until quite recently, I did not get the jokes. Had you taken the pains to point out to me, at fourteen, the extent of the levity that permeates Walden and much of Thoreau’s writing, I might have punched you in the nose. ...

Visit Lit Hub to read the rest.
And get your copy of Funny-Ass Thoreau right here, or ask for it at your neighborhood bookseller.
Posted by mcunningham at 8:59 PM

From the Archives, Reposted for November 9th, 2016: "Optimism" 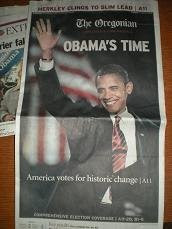 "Then he began to make it his. It was very beautiful because it wasn’t hurried and it was no longer a lament. I seemed to hear with what burning he had made it his, with what burning he had yet to make it ours, how we could cease lamenting. Freedom lurked around us and I understood, at last, that he could help us to be free if we would listen. … And yet I was aware that this was only a moment, that the world waited outside, as hungry as a tiger, and that trouble stretched above us, longer than the sky.”
– James Baldwin, "Sonny’s Blues"

Last week’s election was an event of such exultant transformation for Americans everywhere (and even non-Americans in countries all over the globe) that I, like most who witnessed it, experienced a rare emotional mingling of passion with politics.

Here in Portland, on the moment the election was called, a crowd of strangers downtown erupted into a spontaneous chorus of “The Star-Spangled Banner.” From the looks of it, most of these celebrants were too young, as am I, to have ever witnessed such a grand and exuberant historical moment, or to have been inspired to such emotive patriotism by a political event. Like me, most were too young to have lived through the blood-bright tangle of tragedy and social progress that was the 1960s.

I was born during the Carter administration and came of voting age just in time to cast my ballot in the Clinton/Dole contest of 1996, whose outcome sustained an era of blasé prosperity and kept the partisanship pendulum swinging for years. They seemed, those years, to be all politics, little more. Aside from silly extramarital scandals besetting the White House, it was a period almost ahistorical in its uneventfulness. Bombs fell in Kosovo, and important things happened in Ireland, but those were overseas events, and did not substantially reverberate in our national character. Here at home we hummed along — or maybe droned.

So during my lifetime I’d never had the pleasure to witness how the national political stage can, on rare occasion, furnish a scene of monumental drama and beauty. I had never — I might as well admit — experienced that glorious swelling in the breast which some of my elders proudly referred to as “American optimism.” Quite the opposite, sadly, for the true defining national events of my lifetime were all squeezed into a single fatal day early one September. The world-splitting consequences of that day — ideological wars within wars at home and abroad — only degraded my faith in the course my country was taking.

But now, after years of allowing the box-cutters of the 9/11 terrorists to scar our hearts with divisive fear, after years of accelerating our aggressions abroad instead of nurturing optimism and coming together in spirit at home, we Americans have finally embraced renewal. And I have learned, for the first time in my life, what the old proverbial American optimism feels like. At last, I understand it to be profoundly alive. Cynical politicking, lobbyists, or a disaffected citizenry cannot squelch it; despite such corrupting influences, optimism is implicit always in the self-correcting genius of our democracy. While it may lie dormant in certain periods, still, even after the gloomiest epochs, this fundamental spirit can be revived. It awakens through the people whenever the people give sway to their higher instincts. And how refreshing, now, to think that our new president may strive to govern much the way he campaigned — by inspiring the people to rise to the beckons of their better selves.

Here’s part of what he said in his speech in Grant Park on election night (the whole remarkable speech merits close reading):


Let us summon a new spirit — of patriotism, of responsibility, where each of us resolves to pitch in and work harder and look not only after ourselves but each other. … In this country we rise or fall as one nation, as one people. Let’s resist the temptation to fall back on the same partisanship and pettiness and immaturity that have poisoned our politics for so long. … As Lincoln said to a nation far more divided than ours, ‘We are not enemies but friends. Though passion may have strained, it must not break, our bonds of affection.’

To those Americans whose support I have yet to earn, I may not have won your vote tonight but I hear your voices, I need your help, and I will be your president too. And to all those watching tonight from beyond our shores, from parliaments and palaces to those who are huddled behind radios in the forgotten corners of the world, our stories are singular but our destinies are shared, and a new dawn of American leadership is at hand.

To those who would tear the world down, we will defeat you. To those who seek peace and security, we support you. And to all those who have wondered if America’s beacon still burns as bright, tonight we proved once more that the true strength of our nation comes not from the might of our arms or the scale of our wealth, but from the enduring power of our ideals: democracy, liberty, opportunity, and unyielding hope.

That’s the true genius of America: that America can change. Our union can be perfected.

We all know Obama ran a masterful campaign. But perhaps “Hope,” “Dreams,” and “Change,” despite being politically serviceable, despite their repeated, calculated deployment from the campaign stump, really are more than mere buzzwords. Perhaps they are genuine emblems of a spirit that America was once celebrated for — and which it may yet personify.

On NPR’s Fresh Air on November 5th, journalist Bill Moyers reflected on the events of the previous night:


Joseph Campbell, the popular scholar of mythology once said to me, ‘Moyers, if you want to change the world, you change the metaphor.’ And yesterday America changed the metaphor. It was a symbolic moment for a country whose whole history has been pinioned by race. I just felt a great stone lifting from our neck. … Now, yesterday did not end issues of race in this country. … The realities are going to be with us, but …symbolically, metaphorically, and politically, I think race is not going to have us by the throat the way it has for so long now.


I was struck, too, by these eloquent words in an Oregonian editorial on November 5th:


Every president takes office promising to make the United States a different country than it was. Few succeed, and Obama’s White House plans, like those of any other president, deserve to be viewed through the prism of improbability. But through this historic campaign, and his impressive, once implausible triumph, Obama has already done something that few presidents manage during their entire term in office. He has shown us that we are closer to becoming the country that we hope to be.


On the night of Tuesday, November 4th 2008, I learned first-hand how an external, seemingly remote political event can become internal, emotionally relevant, and even intimate to the masses. As Anna Quindlen observes at the back of Newsweek’s special Elections Issue, Obama has, if only for a moment at the start of his presidency, “made the political spiritual.”

For me, that’s the astonishing essence of this turning point in the history of our nation: The collective soul of a people truly can be transformed. I don’t mean to say it happened all at once last Tuesday. It’s only beginning, and it may take generations. But it’s possible. Call that American Optimism.

(P.S. Take a moment to check out the President-elect’s new web-page soliciting your vision for America.)
Posted by mcunningham at 10:11 AM

Reality television wins. But we can resist. We can resist quietly, steadfastly, everyday. In our loving, our art-making, our communities.
— M. Allen Cunningham (@M_A_Cunningham) November 9, 2016