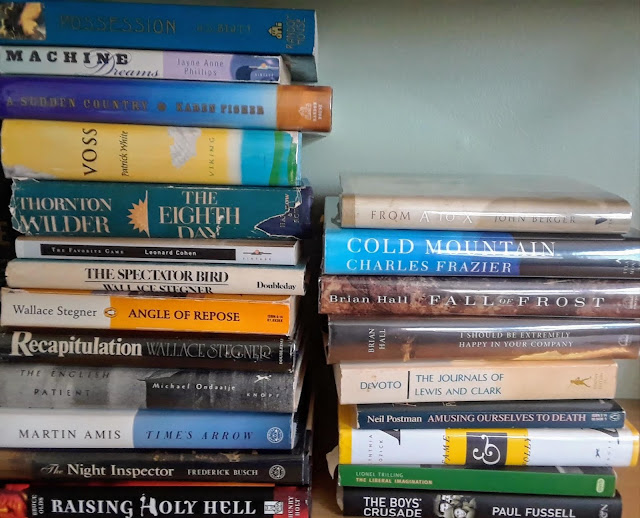 Possession by A.S. Byatt
Nearly 20 years after I first read Byatt's Booker Prize winner Possession, her use of the epistolary form still dazzles me. She's unafraid to take up 50 to 60 pages with the "primary texts" of a correspondence. Surely she had editors nagging her to share only "the highlights" of her characters' letters. But that would have yielded a fundamentally different novel -- and probably a flimsy one. Perpetua's Kin has its own lengthy epistolary sections.

Machine Dreams by Jayne Anne Phillips
Phillips conjures mid-century America with such tactile vividness, familial tensions with such ease, and the scope of tragedy across 3 generations. Her structure here inspired mine in Perpetua's Kin.

A Sudden Country by Karen Fisher
Sentence for sentence, Fisher's narration hypnotizes. She charged my batteries at a time early in my writing of Perpetua's Kin, when I (and the novel) really needed it.

Voss by Patrick White
Cited by Karen Fisher as an antecedent to A Sudden Country, the prophetic power of White's prose is always inspiring. He won the Nobel Prize in Literature for good reason. His depiction of landscape and the small figure a man cuts against the earth remained luminously in my mind during my work on Perpetua's Kin. (As noted in the acknowledgments, Perpetua's Kin makes use of a few phrases from Voss.)

The Eighth Day by Thornton Wilder
An epic metaphysical mystery spanning decades and continents, winner of the National Book Award, this inimitable novel gives us the prophetic and epigrammatic Wilder we know from The Skin of Our Teeth and Our Town, but here he has the greater breadth of novelistic description and frequent rhetorical passages. I studied his commanding way of depicting small incidents within a massive canvas.

The Favorite Game by Leonard Cohen
Line for line, Cohen's overlooked jewel of a novel (his debut) goads me on to breathe freer, see clearer, and do and try more.

Hamlet by William Shakespeare
I was first exposed to the immortal Dane via Franco Zeffireli's film adaptation, which I viewed in the cinema when I was 12. I've seen innumerable versions of Hamlet on film and stage since then, (including the Barbican's unforgettable 1997 RSC production starring Alex Jennings) and I've never stopped returning to the original text. I've described Perpetua's Kin as a reworking of Hamlet, and I'd wager that keen readers will spot the many allusions and outright quotations in the text of the novel (e.g.; Denmark has Elsinore, while my Northern California of the late 1880s has El Señor).

The English Patient by Michael Ondaatje
Ondaatje's distillation of "big-canvas" events through intimate scenes and relationships, his use of alternating points of view, his characteristically evocative turns of phrase, and his central placement and reliance upon imagery -- these are just a few of the things that The English Patient (and, for that matter, most of Ondaatje's novels) -- exemplify for me.

Time's Arrow by Martin Amis
It is no exaggeration to say that my first reading of Time’s Arrow changed my life. The sheer authorial bravura on display was like nothing I’d known in contemporary literature. Is there another contemporary work as technically daring and as gracefully executed?

The Night Inspector by Frederick Busch
Busch's masterwork. His use of nineteenth-century parlance, his facility with the violent narratives of Civil War combat, and the sustained intensity of his language, treatment, and themes are all absorbing and instructive. One of the great unsung American novels of the last 20 years.

Raising Holy Hell by Bruce Olds
A precursor (by 22 years or so) to George Saunders' astonishing experimental-dramaturgical-collagist-novelizing in Lincoln in the Bardo. My first reading of Raising Holy Hell was for me the beginning of a new way of looking at narrative. And Olds' ventriloquism inspires much of Perpetua's Kin. (I thank my friend Jon L. for introducing me to Olds' work.)

From A to X by John Berger
A tremendously affecting epistolary novel by one of our greatest writers.

Cold Mountain by Charles Frazier
The cool and remote evocations of the savagery of the Civil War.

I Should Be Extremely Happy in Your Company and Fall of Frost by Brian Hall
In both of these novels, Brian Hall demonstrates a breathtaking command of -- and flexibility in -- narrative voice. He is also constantly taking risks as a writer, whether inhabiting the first-person perspective of Sacagawea (and inventing a new narration technique to do so) or scrambling chronology while writing about Robert Frost.

The Journals of Lewis & Clark, edited by Bernard DeVoto
A document of Manifest Destiny at ground level, and in the form of two unlikely and fascinating protagonists. The scale of history is, in the end, always human.

Amusing Ourselves to Death by Neil Postman
Postman's seminal work of cultural criticism has been on my mind for more than a decade now, and its lessons have in some way infused everything I've written in that time, fiction and nonfiction alike. "We have learned irreverence toward sun and season," Postman writes. And I put those words directly into the mouth of one of the minor characters in Perpetua's Kin.

Selves at Risk by Ihab Hassan
"The abiding question concerns the American quester, the motive, history, and space of his journey, how that space affects him, and the nature of his own self-apprehension as an other, an American, as he moves in the contemporary world. For Otherness is not merely given, an attribute of others; it can be an attribute of ourselves, either in self-alienation or in response to the relentless gaze of another." I kept this and many other passages from Hassan's book at hand while thinking about Benjamin Lorn's journey(s) in Perpetua's Kin.

Fame & Folly, Art & Ardor, and The Din in the Head by Cynthia Ozick
Ozick is our finest living literary critic and essayist. Just go read her essays, please.

The Liberal Imagination by Lionel Trilling
I've been reading Trilling since first being introduced to his work via Cynthia Ozick. If you love literature, then Trilling's perspectives, and his ways of thinking about literature on the page -- free from every critical hand-me-down -- are always enriching.

The Boys' Crusade by Paul Fussell
Fussell writes as a World War II veteran committed to tearing down vainglorious delusions about the "nobility" of war. He's a staunch realist, and also an elegant writer. I gleaned so much from this book as well as Fussell's memoir Doing Battle, and I'm thankful for his voice.